City Logistics Kraków Airport. This is where InPost’s Paczkomat® parcel lockers are to be produced. 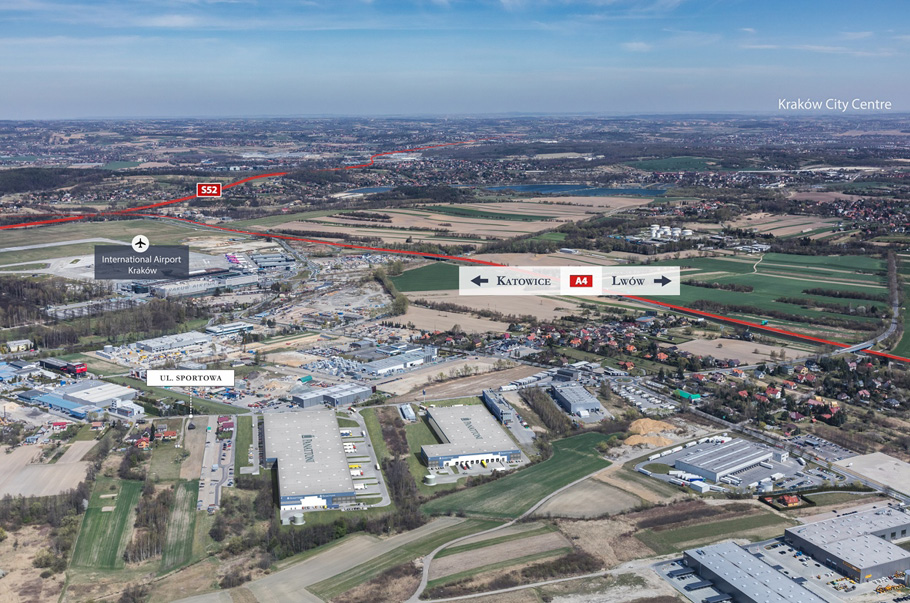 Panattoni, Europe’s leading industrial developer, is to provide space for the production of Paczkomat® parcel lockers for InPost and is also to construct an R&D centre for the company. The Paczkomat® factory is being built as part of the newly established City Logistics Kraków Airport park. It will take up 7,230 sqm and will be fitted with solar panels. Panattoni’s 12,500 sqm city park in Małopolska is being built as one of the developer’s strategic investments and it will include small business units to meet the growing demand for industrial space around Kraków. The new park is to be next to the Balice II junction on the A4 motorway and is to open this year in the summer. The entire development is to be submitted for BREEAM certification and should meet the standards required for a rating of ’Very Good’.
Panattoni furthers the evolution of the parcel locker. The company has leased out 7,230 sqm. (with 5,800 sqm of production space and 1,432 sqm of offices) in City Logistics Kraków Airport. As a result, InPost will improve its production facilities and hire more employees while at the same time ensuring that its staff will have a convenient place to work. At City Logistics Kraków Airport not only will Paczkomats® be produced (which includes the fitting of the electronics and the touchscreens) but an R&D centre is also to be built with two laboratories and a showroom, where research and testing work is to take place.

The development of this manufacturing plant for InPost within the park does not represent the first time these two companies have worked together. Up till now, the logistics operator has leased a combined 250,000 sqm from Panattoni. This includes over 9,000 sqm in a different urban logistics park in Kraków- City Logistics Kraków I. Robert Dobrzycki, the CEO at Panattoni commented that: “Once again we are announcing a development project in Kraków that will qualify as a last-mile facility and, in addition, it is going to be next to the airport. For this reason, it is worth pointing out the significance of the park for such a difficult market as the centre of Małopolska is.” He adds: “Kraków is a market where there is a limited supply of land, which results in relatively high prices. What is the second-largest city in Poland, both in terms of its area and its population, should have its own warehousing resources. That is why I am convinced that City Logistics Kraków Airport will allow many organisations to stretch their wings.” This will also be made possible by the small business units that will be available at City Logistics Kraków Airport. The minimum size of a module will be 1,200 sqm and they will be available form July this year.

The number of Paczkomat® parcel lockers in Poland has already grown to over 11,000, more than double the number of Poczta Polska post offices. According to a report published by Gemius in March 2020, 61% of internet shoppers state that Paczkomat® parcel lockers are the way they most often choose to receive their purchases. Rafał Brzoska, the CEO at InPost comments that: “Extending our facilities does not only mean more locations for our Paczkomats® – even though we want to add 100 machines a week this year. Together with new sorting and logistics centres as well as investment in IT, our priority is to strengthen our position as the leading producer of such machines in Europe. As a result, we will be able to quickly introduce new innovative systems in our machines and be the first to test ideas that nobody has yet tried in the market. We hold the patents for most of the innovations that we use in our Paczkomats® – which gives us greater scope for development. Now we are also going to open an R&D centre with a laboratory so that we can further innovate.”

Following the principles of sustainable development. Like all of Panattoni’s new centres developed for its own portfolio, City Logistics Kraków Airport is to undergo BREEAM certification for a rating of ‘Very Good’. Around the glazed buildings, there will be a green area with a relaxation zone as well as cycling facilities. The plants are to be chosen to suit the local conditions. The area being developed for InPost will be equipped with a photovoltaic installation and the workers are to have improved access to daylight not only because of the skylights that will be in the roof but also as a result of light being able to enter from the sides of the building.

City Logistics Kraków Airport – urban logistics near the airport. Panattoni’s latest investment project is a 12,500 sqm City Logistics warehousing centre. The park will be in Cholerzyn, in the vicinity of Kraków’s only airport. It is in Balice just next to the Balice II junction on the A4 motorway on the same side as the entrance road heading in the direction of Katowice. Nearby City Logistics Kraków Airport are numerous industrial buildings and future tenants will value the easy road access, both to the city and to the A4 motorway, which also acts partly as Kraków’s ring-road.