Polish market in the transformation stage 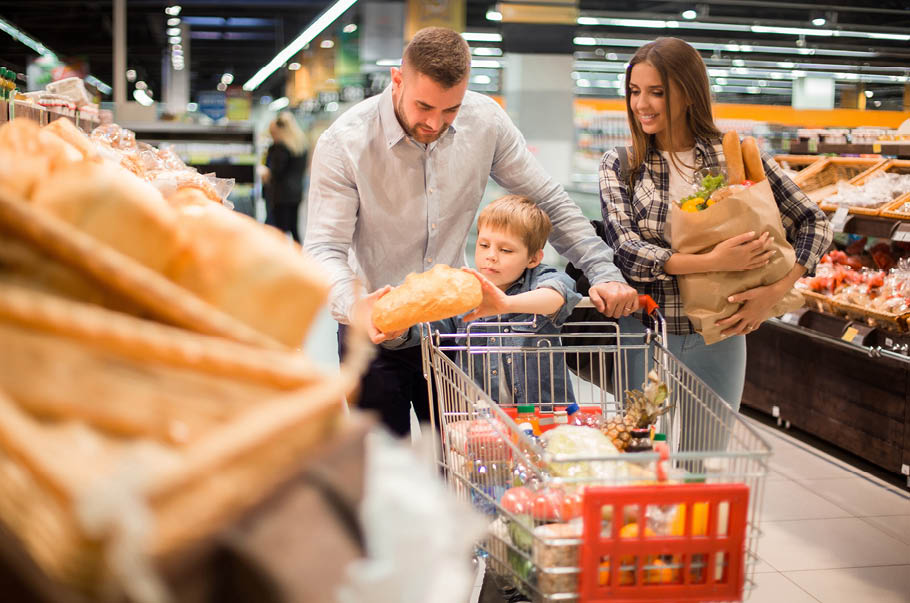 Despite noting an increase in the commercial turnaround of FMCG products and an increase in both volume and retail sales in recent years the Polish market was characterized by a number of processes leading to its general restructuring.
The formats of commercial establishments which dominated the market for nearly 20 years begun to matter less whereas other formats visibly strengthened their position. This phenomenon was accompanied by changes in ownership of numerous chains and the dropping out of entrepreneurs who were not able to adapt their operations to clearly changing consumer preferences from the market. As a result on one hand a tendency of shutting down numerous traditional commercial establishments (apart from those which became a part of a franchise chain) was maintained and on the other large-surface stores, primarily hypermarkets but also smaller supermarkets, lost their importance as the major market players they used to hold ten years prior. Only those who were able to meet expectations of clients were able to cope with the situation.

Wholesale trade: the leader and others, lagging far behind...

The current shape of the wholesale market in Poland was already formed a few years ago. The dominant position is, after takeover of the wholesale operations of the Emperia Group, being held by the Eurocash Group, a listed company established more than 20 years ago by its current Chief Executive Officer Luis Amaral. Through takeovers and organic development Eurocash seized approximately 20% of the market. As a wholesale entity (Eurocash also operates retail and franchise chains) it also conducts service sales as well as cash&carry-type sales. The former constitutes of servicing both their own retail establishments as well as external traders. The latter is realized through more than a hundred of Eurocash C&C wholesale stores where primarily small, independent entrepreneurs who were able to survive on an increasingly hostile market buy. Experts estimate that this form of retail client servicing will decrease in importance on the Polish market which can be partly confirmed by the fact that development of these wholesale dealers has recently visibly slowed down.

The second volume sales entity in terms of size although lagging far behind the leader, is Grupa Kapitałowa Specjał from Rzeszów established and led by Krzysztof Tokarz. He admits that his company does not even aspire to „catch up with „ Eurocash which does not change the fact that Specjał, with commercial turnover of approximately PLN2bln, is, apart from its largest competitor, the sole nation-wide wholesale company. This has been enabled by significant acquisitions of other companies including a major wholesaler Rabat Serwis from the Pomerania region. Similarly to Eurocash, Specjał has access to enormous franchise backing other wholesalers cannot boast of.

And the number of wholesalers is decreasing annually. It is prudent to stress here that during the first years of the Polish political transformation an estimation has been made indicating that more than 8 thousand general food wholesale entities emerged. Currently this number is significantly lower and companies which can claim a turnover of several hundred million zlotys are a dozen or so. Despite making attempts at reaching the status of nation-wide companies none of the wholesalers were able to achieve this and they still hold positions of regional enterprises. Among the largest of this type of wholesalers we should list, among others, Marol from Poznań, PPHU Gniezno, Bzomex and Frukt companies from the Lesser Poland region or Bać-Pol from Rzeszów, currently in the process of restructuring. Among the major entities there are also companies associated in the MPT Group (incl. Stanro, Polmars, Łakoć, Mathias) with a joint turnover of over PLN1bln and companies associated in PHS Unia which associates smaller wholesale dealers such as Sim, Agawa, Lemonex, Delta and several others.

Retail sales have been for several years dominated by discount store chains. In this respect the Polish market is beginning to increasingly resemble markets of our western neighbours. Currently, there are four major discount store chains operating which jointly possess more than 4 thousand commercial establishments. The largest is the Biedronka chain which commands approximately 3 thousand stores. The second in terms of the number of commercial establishments is German Lidl followed by the Danish chain Netto. The relatively weakest discount store chain is Aldi albeit it announced major expansion in the coming years. If one takes into account experiences of this chain on its native German market this announcement is not to be underestimated.

In recent years discount stores have reported the highest increase of sales in their commercial establishments. And despite not being the cheapest stores, regardless of what they communicate to the clients, their pricing and product range policy awarded them with enormous success on the Polish market. These are no longer stores where products are being sold in primitive conditions, directly from pallets. Owing to both the external and internal visualization of individual commercial establishments and expanding the range of products on offer with brand products they are closer to supermarkets. The times when discount stores offered consumers only house brand products, quality of which left a lot to be desired, are long gone.

It is estimated that in the coming years the role of discount stores in food trade in Poland will continue to increase. Even more so due to the fact that discount stores are able to perfectly adapt to current consumer trends. Shelves containing so called „healthy products” or vegetarian and vegan products are expanding and the extra-trade services, particularly in the form of coffeehouses, are being introduced in an increasing number of stores.

When giant hypermarket chains entered the Polish market 25 years ago they were able to rapidly take over more than 30% of retail in our country. There were a dozen or so of them and they quickly became owners of more than one hundred commercial establishments. However, times verified the capabilities of these operators and currently only several hypermarket chains remain from the past dozen or so. Such tycoons as Real owned by Metro Group, Geant owned by Casino, Hypernova owned by the Dutch group Ahold or Jumbo owned by the Portuguese group Jeronimo Martins (owner of the Biedronka chain) disappeared from the market. Currently, only few chains still operate: French chains Auchan, Carrefour, B1 and E. Leclerc, German Kaufland and British Tesco. Auchan and Kaufland operate in a manner akin to discount stores, although on a larger scale (large ratio of house brands and the lowest possible prices), Carrefour also commands a chain of franchise establishments which have significant influence on the financial results of the group, E. Leclerc is a group of large, independent stores which operate in a manner resembling a franchise and B1 is a chain established due to a necessity: when taking over the Real chain several years ago Auchan was forced by the Competition and Consumer Protection Office (Anti-monopoly Office) to resell several of its commercial establishments which were turned by Schiever company into the B1 retail chain. On the other hand, the financial standing of Tesco on the Polish market appears to be dire enough, it is expected that the British central office of the company will make a decision this year concerning retreating from the Polish market.

The difficult standing of hypermarkets is a derivative of changes in the thinking of Polish consumers. Along with improvement of their financial status consumers are more concerned with the ability to do shopping fast and the proximity of stores. Usually hypermarkets simply do not meet these conditions. In turn, smaller stores located near the place of residence of a consumer became increasingly important.

For the reasons listed previously the standing of supermarkets on the Polish market varies significantly on a case to case basis. The smaller ones, located closer to the potential buyers are doing pretty well, excellent even, whereas the other ones are beginning to shut down. Such chains as Dino or Stokrotka, taken over from Emperia by Lithuanian Maxima Group, can boast about the rapid increase in the number of commercial establishments and pronounced increase in sales. Facilities described with the term proximity are not only located near the place of residence of customers but are also able to adapt their range of products to local demand. 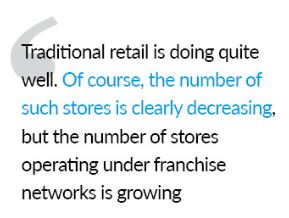 As a result the Dino chain of stores unexpectedly became one of the most dynamically developing trade companies in Poland further supported by a very successful stock exchange debut. Polomarket, one of the older domestic retail chains, also begun to prosper in a similar category of supermarkets.

However, the number of supermarkets which repeat the sins of their older brothers, hypermarkets, and are unable to negotiate the market is significant. The most explicit example of this phenomenon is the fate of such a well known store chain Piotr i Paweł which is in fact dropping from the Polish market after prolonged agony, also judicial, and is ultimately being taken over by the SPAR Group from the Republic of South Africa. The entrance of this operator into Poland is also related with a dispute which erupted between the central office of SPAR located in the Netherlands and Polish co-partnership SPAR Polska owned by Bać-Pol which claims to be the sole SPAR licensee on our market. The courtroom battle in this case is ongoing and if Bać-Pol loses it the South African SPAR Group can soon become one of the most important retailers in Poland.

Against all appearances traditional retail, sales realized in stores with a surface area below 300 square meters, is doing pretty well. Naturally the number of such stores is visibly decreasing but the number of stores operating as a part of franchise chains is increasing. All of them amount to approximately 35 thousand stores. In most cases franchise chains are operated by the largest wholesale dealers. The chains managed by Eurocash (Lewiatan, Groszek, Euro Sklep, Gama) constitute of nearly 10 thousand establishments, Specjał supervises nearly 8 thousand stores (Nasz Sklep, Delikatesy Premium, Livio), other retailers such as Chata Polska supported by Marol, Sklep Polski supported by PPHU Gniezno or chains operated by wholesalers from PT and PHS Unia groups own several hundred stores each. Joint actions undertaken by medium sized wholesale traders and small retailers enabled a significant number of traditional commercial establishments to remain on the market.

The chain of convenience stores operating under the Żabka label is a particular example of success. Currently it constitutes of approximately 6 thousand stores and the executive board of the company plans further expansion. All this without potent backing of wholesalers. Apart from Dino proximity supermarkets this success is the most spectacular achievement of Polish commerce in the recent period. The idea of a small and convenient store located as close to a customer as possible and offering range of products perfectly suiting expectations evidently worked out even despite rather high prices. Naturally it should be to a significant extent credited to the lack of competition and strong media support. However, this does not change the fact that this success is truly admirable.

The emergence of players less obvious until recently on the Polish market has considerable importance for the present day and the future of Polish FMCG trade. With the advent of the ban on trading on Sundays the stores located at petrol stations increased in significance. Owing to this fact the largest petrol station operators have high hopes related with the increased sales of FMCG products in their establishments. Stores located in Orlen, Shell or BP petrol stations are increasingly well supplied with not only alcohol or cigarettes but also with traditional groceries such as bakery products and cold meats.

Also the internet food trading is beginning to take off. Naturally we are far from reaching the dynamics characterizing sales of industrial products but it will change in coming years, even more so due to the increasing skills and experience of internet store owners in this field. Therefore brick and mortar trading must take into account the emergence of new, previously little known, competitors on the market.