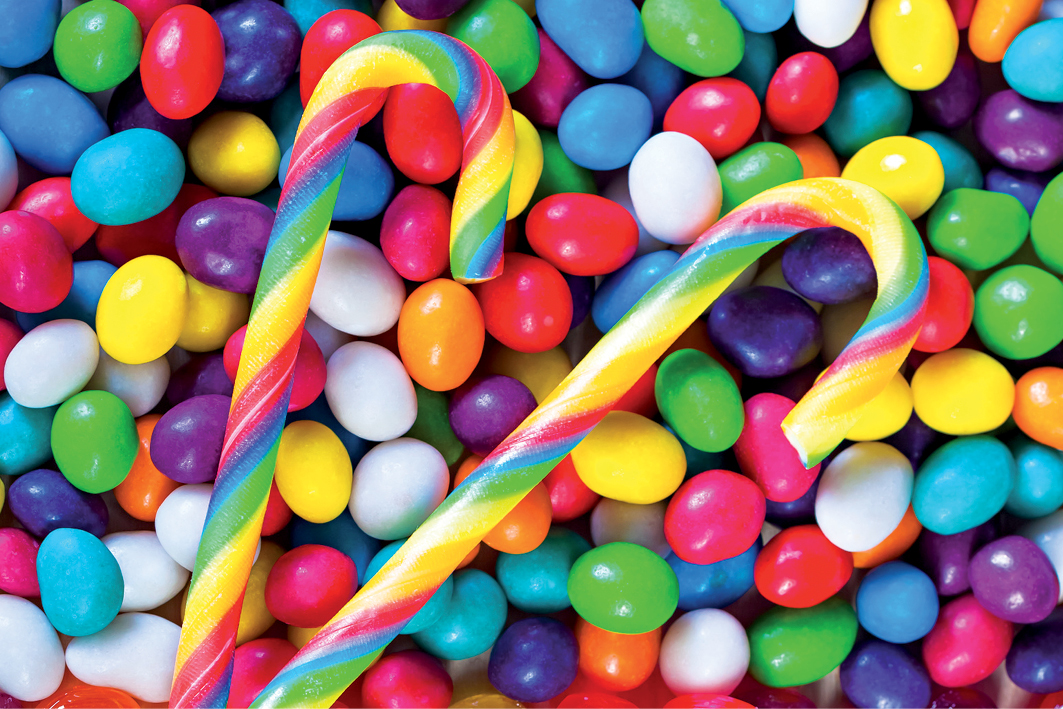 Sweets (confectionery products containing cocoa and containing no cocoa – CN codes 1806 and 1704) were the most valuable items in both exports and imports of sugar and confectionery products. In 2012, the amount of sweets exported grew by 11% reaching 274.2 thousand tons.
Its value increased by 11% as well and reached €1.054 billion, and thus, for the first time, its value amounted to more than one billion. Over the same period, imports were higher by 3%, increasing to a little more than 154 thousand tons. The value of imported sweets has increased by 5% and amounted to €484.8 million. The export growth rate was significantly higher than the import growth rate, which considerably contributed to improving the foreign trade balance of these products. The positive trade balance amounted to €569.8 (up by 16%) and 120.1 thousand tons (+23%). In terms of volume, chocolate products accounted for 71% of the imports of sweets. In terms of value, their share was higher by 3 percentage points. However, as far as exports of sweets are concerned, chocolate products were 80% of its amount and 82% of its value.

72% of sweets export, in terms of volume and 68% in terms of value were sent to the EU. Third countries, including the CIS (7%), were also other important export markets. In 2012, United Kingdom was the main sales market for Polish sweets, where one fourth of exports were sent. The next place was taken by Germany (12% share), followed by the Czech Republic and Russia (5% share), the Netherlands, Hungary, Romania, Turkey, France and Lithuania followed. Exports to the top 10 countries accounted for two thirds of exports in total.

As in previous years, in 2012, sweets were purchased primarily in the EU, where 96% of these products were imported. Third countries became minor importers due to a decrease in purchases in Colombia, Ecuador, Switzerland and Côte d'Ivoire. Germany remained the main supplier; 46% of imported sweets were purchased there. In Italy (10% share) and Belgium (7% share) as well as in the Czech Republic and in the Netherlands (6% share each).

In 2013, the demand for Polish sweets will largely depend on the results of the EU economies. Although sweets are not articles of prime necessity, they are still a great idea of solace in difficult times. In 2012, cocoa became slightly more expensive, but it is still significantly cheaper than it was in the previous years. Throughout the world sugar became much cheaper; in Poland its prices were stable, but in 2013 they are likely to be lower. It can therefore be expected that in 2013 exports of sweets from Poland will rise at a similar pace as well.

The volume of exports of confectionery products containing no cocoa in 2012 increased by 5% to almost 54.3 thousand tons, while the value of exported commodities soared rapidly, i.e. by 19% to nearly €193.7 million (€162.9 million in 2011). In the same period, 45 thousand tons of these products were imported to Poland (a decrease by 2% from 45.8 thousand tons) for €126.1 million, i.e. more by 4% compared to €121.3 million in 2011. As a result, the positive balance of trade has increased by as much as 63% to €67.5 million (compared to €41.6 million previously). In terms of volume, a surplus was recorded in the amount of 9.3 thousand tons, whereas the balance has increased as well by 63% from 5.7 thousand tons. Results in the foreign trade of sweets containing no cocoa were improved as a result of a significantly higher growth rate of the value of exports than of imports, combined with the negative dynamics of imports and positive dynamics of exports in terms of volume.

Countries of the European Union are still the most important outlets for Polish confectionery products without the content of cocoa, where 63% of exports (34.3 thousand tons worth €124.3 million) were sent. The share of EU countries decreased, however, year by year by 4 percentage points. Third countries gained in importance, largely because exports to the USA, Saudi Arabia and Yemen were intensified. 9% of exports were sent to CIS, one fourth was sent to other third countries, including the member countries of NAFTA, 5% (Canada and USA).

In 2012, Germany was the main customer of Polish sweets without the content of cocoa. It accounted for 23% in terms of volume. Germans bought almost 12.6 thousand tons of these products for €39.9 million.  It was followed, with a much smaller share, subsequently by Saudi Arabia (up by one fourth to 3.3 thousand tons), United Kingdom (3.1 thousand tons, +27%), Russia (3 thousand tons, less by 5%), Czech Republic (2.5 thousand tons), Hungary, Romania, Yemen, Canada, Slovakia, USA and Lithuania.

EU countries were among the main suppliers of CN code 1704 products to the Polish market, from where 91% of these products were imported. Imports from the EU-26 slightly exceeded 41 thousand tons (+6%), and the value reached almost €113.8 million (+11%). Third countries’ importance decreased, mainly because of a significant reduction in purchases in Colombia (by a half) and Ecuador (71%) and, because imports from the EU were intensified.

As in the previous years, so in 2012, confectionery products with no content of cocoa were imported mainly from Germany - 17.4 thousand tons with a value of €52.3 million, which accounted for a 39% share in terms of volume and 41% in terms of value. The volume of imports from this country increased by 8%, while its value increased by 11%. Despite the 11% decrease to 5.1 thousand tons, the second place was taken by the Czech Republic (11% share). The next positions were taken by the Netherlands (4.1 thousand tons, which gave a 9% share), Spain, and Belgium (2.7 and 2.5 thousand tons, respectively). A two and a half times increase of purchases in Italy, up to 2.1 thousand tons, as well as the decreases of imports from Colombia and Ecuador mentioned above, whose total share dropped by 4 percentage points to 3%, are also worth noting.

The highest recorded exports of chocolate products were exported to EU countries – over ¾ of the export was sent to the EU-26 markets. These countries bought from Poland 162.1 thousand tons for €588.9 million. This represents an increase of 12% and 6%, respectively. To the 15 EU-15 Member States 46.3 thousand tons were sent (22%) worth €211.7 million (+23%). The average value of exports to the EU decreased by 5%. This may be a reflection of the crisis, which is forcing EU partners to choose cheaper products. Also, Russia and Turkey were significant export markets.
Most Polish confectionery products containing cocoa were sent again to the UK - 65.3 thousand tons (up by 16%), for which €234.2 million (up by 27%) was received. This accounted for a 30% share in exports in terms of volume. Shipping to the United Kingdom was intensified after 2004. This may be associated not only with the intra-EU duty-free trade, but also with opening the local labour market and the related large economic emigration of Poles to the Islands. Other significant markets were also Germany (increase by 10% up to 18.8 thousand tons, 9% share), the Czech Republic (12.3 thousand tons, 6% share), the Netherlands (10.4 thousand tons, 5% share), Russia (10 thousand tons), and to a minor extent Hungary, Romania and Turkey.

Within the commodity structure of export, having achieved an increase of 5% in volume, the domination of the other filled chocolates (CN code 1806 90 31) has remained. Their export exceeded 55 thousand tons (25% share) and their value reached almost 262.3 million tons (more by 1%), which accounted for a 30% share. The next place was taken by spreadable products containing cocoa (CN code 1806 90 60), where 29.2 thousand tons for €98.2 million were sold outside the Polish borders. This accounted for 13% in terms of volume and 11% in terms of value in the export structure. The third place was taken by chocolate products in blocks, slabs or bars (CN code 1806 31 00). The volume of their export amounted to 26.3 thousand tons (12% share) with a value of €73.7 million (9% share).

Confectionery products containing cocoa were imported during this period almost entirely from the EU countries – from the EU-26 countries, 98% of products labelled with the custom tariff code CN 1806 were purchased, in terms of value and volume in total. Imports from the EU-15 Member States accounted for 88% in terms of volume and 89% in terms of value.  In 2012, third countries did not play a significant role in supplying Poland with sweets containing cocoa. Imports from Switzerland decreased by 23% to barely 470 tons. Purchases from Côte d'Ivoire, which is the largest producer of cocoa beans in the world, decreased by 44% to 343 tons. Their total share slightly exceeded 1% of imports.

The commodity structure of Polish imports of confectionery products containing cocoa was dominated by three products. The first item from among these products were products marked with the CN code 1806 20 95 (other food products containing cocoa in blocks, slabs or bars weighing more than 2 kg or in liquids, pastes, powders, granular or in other form, in containers or immediate packaging, with a content exceeding 2 kg), which were imported in the amount of 21.3 thousand tons for nearly €58.9 million (20% share in terms of volume and 16% in terms of value).

The second group were other food preparations with cocoa in blocks, slabs or bars, filled (CN 1806 31 00). In terms of volume, imports of these commodities amounted to 18.3 thousand tons. This accounted for a 17% share in the imports of these commodities in terms of volume. The value of purchases increased by 4% up to €69.7 million, which accounted for 19% of the purchasing of confectionery products containing cocoa in total (the largest amount in terms of value). The products of the CN code 1806 20 10 were in third place (other preparations in blocks, slabs or bars weighing more than 2 kg or in liquids, pastes, powders, granular or other bulk form in containers or immediate packaging, with a content exceeding 2 kg containing 31% or more of cocoa butter or containing 31% or more of cocoa butter and milk fat in total). Their import exceeded 13.7 thousand tons, while the value €34.9 million (with shares of respectively, 13% and 10%). Products of CN codes 1806 90 19 (10.1 thousand tons), 1806 32 90 (7.5 thousand tons) as well as 1806 90 60, 1806 32 10 and 1806 90 31 were the following positions.

Tomasz Pańczyk
Based on: Analysis of selected issues and trends in the Polish production and foreign trade in agricultural and food products in 2012, FAMMU/FAPA, Foreign Agricultural Markets Monitoring Unit – April 2013.