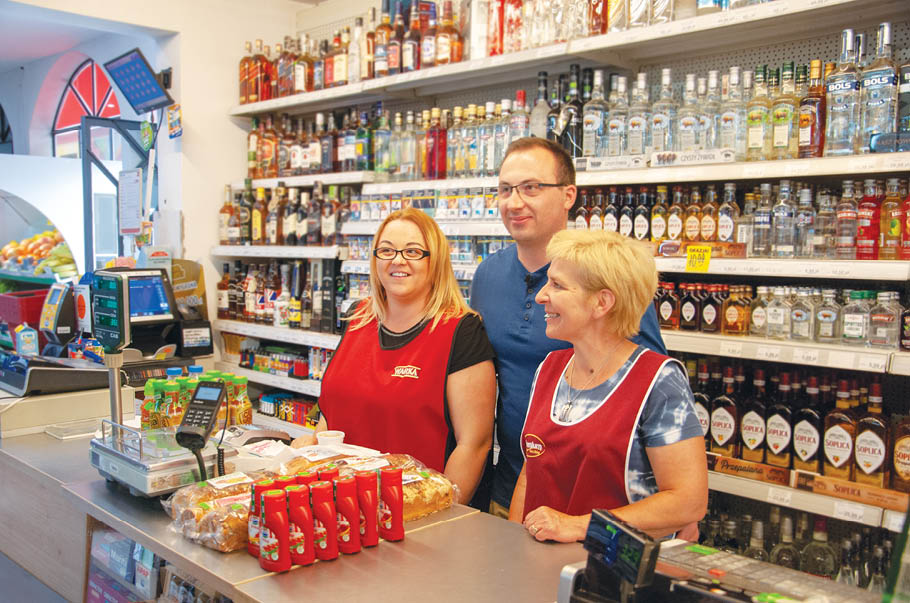 No European country has developed such a model of trade in food products as in Poland. And it should not be expected to undergo any major changes in the years to come.
Nowhere have small, traditional grocery stores retained such a strong market position as they have in Poland. In the Czech Republic or Hungary, not to mention France or Germany, small retail outlets have just a token share in the market, comprised, above all, by a relatively narrow group of specialist stores. In Poland, the sales share of stores with an area up to 300 m2 is estimated at more than 40% of the entire market. Hypermarkets, supermarkets and discount stores have failed to dominate the FMCG trade completely, as they have in most European countries where the market share of the so-called modern trade can reach as much as 90%.

This state of affairs resulted from several factors. Above all, at the moment of the shift from a centrally planned economy to free market, Poland saw a boom in individual entrepreneurship. After 1990, several hundred thousand companies arose in over a little more than a dozen months, and a large proportion of them were trade enterprises. Sales were conducted in collapsible stands known as ‘jaws’, on camp beds, in tiny booths, on marketplaces springing up like mushrooms. It was on the basis of those tiny companies that the Polish private wholesale and retail trade was born, including mostly food trade. State and cooperative companies, that had dominated the market until recently, proved unable to overcome such an invasion of private entrepreneurship. As a result, as many as 140,000 grocery stores and more than 10,000 wholesalers trading in FCMG are estimated to have been active on the market in mid-1990s.

In late 1990s, the market shaped in such a way, yet still very weak, was entered by large international trade chains, both wholesale and retail ones. In wholesale trade, they included Makro Cash&Carry and Selgros, followed by Eurocash with the Eurocash Cash&Carry wholesale centres. Retail, on the other hand, saw the emergence of German hypermarkets Real, French companies Casino, Auchan and Carrefour, British Tesco or Dutch Ahold, not to mention entities managing smaller stores, such as Scandinavian Rema, Austrian Julius Meinl, or German Edeka. In view of the organizational (not quantitative, by any means) weakness of the domestic trade, international leaders quickly started conquering the market and they had already controlled 40% of it in the late 1990s. This, in turn, brought protests by domestic traders and their associations, as well as demands for statutory limitation of the international expansion.

Due to these measures and, above all, to self-organizing processes of Polish commerce, this invasion markedly slowed down at the verge of the 21st century, and some operators even started abandoning their operations on the Polish market or strongly restructuring their presence. This meant withdrawal of such market leaders as the Casino Group, Ahold, and some time later – the Metro Group with its Real hypermarkets. At the same time, discount stores caught a second wind – rapid development started characterizing Biedronka, owned by the Portuguese Jeronimo Martins Polska company, and two chains owned by the German Schwarz Group, i.e. Lidl discount stores and Kaufland discount supermarkets. In parallel, different forms of self-organization of trader communities, through franchise or partnership chains as well as purchasing groups, became increasingly common.

These processes brought about the current shape of the Polish market. Today, the number of grocery stores in Poland has more than halved compared with 25 years ago, which means above 70,000 retail outlets. The number of wholesalers recorded an even sharper drop, as there are several times, about one thousand, less of them.

The wholesale of food is actually the most consolidated part of the FMCG market. Having acquired its largest competitor, i.e. Tradis owned by the Emperia Group several years ago, the Eurocash Group is currently in control of more than 20% of the market. There is no other company with such a scale of operations in the area of retail. A very strong position is occupied by such food wholesalers as Makro Cash&Carry and Selgros, owning, in total, several dozen sales floors throughout Poland. Of wholesale companies, it is worth mentioning such entities as Specjał from Rzeszów, number 2 in the wholesale of foods; another Rzeszów company Bać-Pol, currently undergoing considerable financial difficulties; Marol from Poznań; or PPUH Gniezno. These wholesalers, just like Eurocash, cooperate with numerous franchise chains associating thousands of Polish traders. Of almost 70,000 traditional retail FMCG stores active on the Polish market, approx. 60% operate under franchise chains. Such chains as Lewiatan, abc, Groszek, Euro Sklep, or Delikatesy Centrum work under the auspices of Eurocash. Specjał is the organizer of Nasz Sklep, Delikatesy Sezam, Delikatesy Premium, and Livio, and last year, it took control of Rabat Detal. Marol cooperates with Chata Polska, Bać-Pol with SPAR, and Gniezno with the Sklep Polski chain. Due to this cooperation between wholesale and retail as well as within retail itself, traditional trade still maintains a very strong position.

Currently, discount retail chains are the most successful, being actually the greatest threat to the position of traditional trade. Here, the scene is dominated by two large chains: Biedronka, owning approx. 3,500 retail outlets, and Lidl with more than 600 stores. There are also such chains as Netto and Aldi, yet their significance is much smaller. Incidentally, discount stores today are a far cry from those stores with a small private label assortment the Polish society remembers from nearly 20 years ago. They are more like supermarkets, also offering branded products under civilized conditions of sale. Discount stores, offering low prices for high-quality products, are becoming stronger year by year.

Supermarket chains are also growing larger, including those of a franchise nature, such as Intermarché with 400 stores or SPAR with more than 250 stores, and proprietary chains, including the most widespread Dino chain owning more than 1,000 stores, Polomarket with almost 300 retail outlets, or the Milo and Eko chains acquired by Eurocash.

Another format of stores operating on the Polish market are hypermarkets. As late as 20 years ago, the biggest stores dreamed of full control of the market, yet now they are experiencing similar difficulties as those in other European countries. Of the more than a dozen chains active years ago, virtually only four major ones have survived: Auchan, Carrefour, Kaufland, and Tesco, whereas the fate of the last one is still uncertain.

Consequences of the social structure

The uniqueness of the Polish FMCG trade market against the rest of Europe is due to more than just the historical factors mentioned above. An important element affecting the development of this system is the socio-demographic structure of the country. A considerable part of the Polish society lives and works outside great agglomerations; above all, in the country and in small towns, i.e. in regions where construction of hypermarkets, supermarkets or, to a lesser extent, a large discount store will not make the enterprise profitable enough. This means that traditional trade in stores with retail space up to 300 m2 remains an alternative to modern forms of retail trade in these regions of Poland. Of course, the number of traditional stores will shrink over time (discounts already announce they will enter smaller localities with small formats), yet small private stores will probably never lose their significance as much as they have in most of the other European countries.

Another characteristic of the Polish food trade is the fact retailers are increasingly willing to reach for the most modern forms of sale. Internet trade is developing quite fast – apart from the largest companies, such as Frisco.pl, tens if not hundreds of smaller enterprises of a different scale are coming into being. Obviously, they are not as many as those trading in industrial products, yet their shares in the sales value are systematically growing. However, given the essence of food trade being the freshness of the products and the consumers’ possibility to assess it on their own, such companies should not be expected to exceed a selling threshold that would make them a threat to stationary trade outlets.